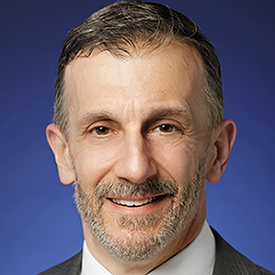 Back to Leadership page

Edbauer was appointed to his current position in March of 2021, following the strategic affiliation of Highmark Inc. and HealthNow New York Inc., the parent company of BlueCross BlueShield of Western New York and BlueShield of Northeastern New York, where he served as executive vice president, chief strategy and growth officer since 2018. A long-tenured health care executive, he previously served as president and CEO of Catholic Medical Partners (CMP) and president of Trinity Medical.

Edbauer holds a doctor of osteopathic medicine from the New York College of Osteopathic Medicine, a master's degree in business administration from Canisius College, and a bachelor's degree in science from the University at Buffalo.

Edbauer is a native and resident of Buffalo, New York. He serves on the board of directors for Canisius College Medical Advisory Board, D’Youville College Pharmacy School Advisory Board and The Center for Hospice & Palliative Care

Current Board of Director affiliations include: